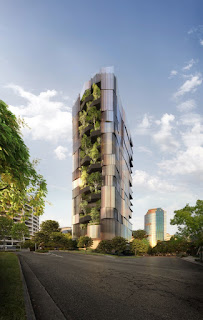 There must be something in the air.  Well, there is....lots of air pollution in the many cities around the world eating up their hinterlands of agricultural land and forest remnants.  In reaction, we have witnessed an increasing number of projects to reintegrate greenery with buildings at both urban and building scale.

Urban forests can help establish green corridors.  Green roofs can add a bit more vegetation.  But by definition, it is difficult to replace the net surface area of plant material found in natural forests, when so much area is dedicated to roads and other impervious infrastructure, and walls, glazing, PV panels or water harvesting roofs on buildings.


The only chance we have of 'multiplying' the green surface of a given piece of land is to put plants on the vertical facades of buildings.

That thought was given very literal interpretation most famously in Patrick Blanc's green wall at the Museé du quai Branly in Paris, and later at 1 Central Park in Sydney.  Such 'green walls' – and others less famous both before and after – represent an approach which is a close simile to the fragile ecologies of cliffs in nature.  As a consequence they are vulnerable to disruption both natural and (for lack of a better word) administrative.  For instance, the greenery on 1 Central Park is looking decidedly ragged because of the natural forces of wind and sun, but it is even more threatened by the reluctance of the owners of many apartments to contribute to the expensive upkeep.  In my view, that kind of green wall will only ever make a small, perhaps negligible contribution to greening the city.

There is another way.  The pioneering example is Bosco Verticale ('vertical forest') in Milan.  When I first posted about that project, it was in the context of my cynicism about the fashion of photoshopping lush greenery on every skyscraper competition entry.  To support my doubts, I marshaled the reasoned criticism of  Tim De Chant who concludes that there are a couple of orders of magnitude difference between the effort required to achieve nominal tree presence on buildings as opposed to that spent on resuscitating the region’s natural habitat. But without repudiating my previous opinion, I have come to see the point of the vertical forest approach.

The difference between 'green walls' and the 'vertical forest' is technical, but simple.  Where the former relies on a thin veneer of plants supported by a thinner scaffold of growing media in mats or pots, the vertical forest approach sets out to create substantial volumes of soil in which to plant shrubs and trees.  The penalty is the extra weight to be carried by the structure, but the benefits are greater.  As with thermally massive construction, you have the inertia of both temperature and moisture regimes, that make the system much less vulnerable to exposure.  Even the issue of the extra weight is not so problematic, given it's dead weight acting vertically, the most easily resisted load on a structure. The sort of large structural planters used on the lower terraces of  WOHA's Singapore Park Royal are arguably a sub-set of this vertical forest approach.

As with most pioneer schemes, the Bosco Verticale projects a single emphatic image, distributing its green terraces relatively uniformly over the building.  What prompted this post is a recent project announcement in Brisbane, Australia, where the balance between the conventional window wall surfaces and the part of the facade given over to the 'forest' is actually quite different.  In fact, so different, it would be easy to jump to a conclusion that the green parts are tokenism.

Closer examination of the scheme reveals  a subtly different reasoning.  The primary motivation is explicitly that apartments should 'feel' like houses in a garden, rather than more ambitious objectives of replacing larger ecological systems.  To that end, the architects respond with a simple apartment layout that maximises the apparent interface between the repeated two storey planted 'courtyards, and adjacent interiors.  Arguably, the precedent for this is Correa's Kanchanjunga Apartments in Mumbai, India, but with plants, rather than walls.

Developers may still begrudge paying for part of their building included more for the plants, than for the measurable occupied spaces.  And regulators may be slow to avoid penalizing the extra space within the built volume.  It may still be a pale imitation of nature in a real forest, or even in a good urban park.  But this latest example may be an effective demonstration for how to integrate elevated greenery that is both more robust and more economical than the green wall prototypes. If so, we can expect more people willing to pay a premium for their houses in the sky, with at least an illusion of arcadia outside their high rise windows.

My previous posts:
Wrong green
No trees please.
Trees in the air 2